10 Best Places to Visit in Ethiopia

10 Best Places to Visit in Ethiopia
Hello Displorers, welcome to another exciting video presented to you by Displore. In this video we shall be taking you to Ethiopia shinning the light on 10 best places to visit in Ethiopia. Ethiopia is a landlocked country in the Horn of Africa. It shares borders with Eritrea to the north, Djibouti to the northeast, Somalia to the east, Kenya to the south, South Sudan to the west and Sudan to the northwest. With over 109 million inhabitants, Ethiopia is the most populous landlocked country in the world and the second-most populous nation on the African continent. The country has a total area of 1,100,000km2 and its capital and largest city is Addis Ababa. Ethiopia’s GDP is at $103.607 billion while the GDP per capita is $1,066.
If you are new here, welcome, be sure to subscribe and turn on notifications so you don’t miss any of our videos.
Ethiopia’s tourism has grown very drastically to become one of its major contributors of its $103.607billion GDP and leading to better knowledge of most of its touristic sites. There are many of them but some truly stand out because of their exceptional appeal and in no particular order here are the 10 best places to visit in Ethiopia.
10. Bale Mountains National Park
The Bale Mountains are a portion of the Ethiopian Highlands. They incorporate Tullu Demtu, the second-elevated mountain in Ethiopia, and Mount Batu. The Weyib River, a headwater of the Jubba River, mounts in these mountains east of Goba. The Bale Mountains National Park spreads over 2,200 square kilometers of these mountains. The main draws of the park are the wild alpine landscape and the comparative ease with which tourists can find distinctive birds and mammals. The Bale Mountains are the abode to plenty of Ethiopia’s endangered animals, particularly the Ethiopian wolf, seen on the Sanetti Plateau. The park also holds the Harenna Forest, located to the south of the mountains, which is a mostly unexplored region thought to hold plenty of undetected types of reptile as well as lions, leopards and different kinds of antelope. The biggest group of Ethiopian wolves is seen in this spot. The habitats here are fascinating and the outer edges of the National Park have fortress-like pinnacles, and on one mountain top there is a vast barren plateau. In other areas there are rainforest and Afro-Alpine forests.
9. Danakil Depression
Located on the frontier between Ethiopia and Eritrea is the Danakil Depression. It’s formally one of the aridest and warmest spots on Earth. Danakil Depression contains three main things to see: Miles and miles of salt plains, Neon green sulfuric acid lakes and Erta Ale. The lava lake at Erta Ale is one of only six lava lakes on Earth and will leave you in awe. The multi-colored hydrothermal bubbling lakes and great salt pans will amaze you and have you question if you are still on Planet Earth. The site is also rich in fossils of ancient hominid. The famed fossil of “Lucy” was found in this area in 1974. The Danakil depression is described by one traveler, who had trekked for almost a year in 10 different African countries, as, “the best thing in all of Africa” also goes by other names such as “Gateway to hell” since it is the hottest place on earth.
8. Arba Minch
Arba Minch is most famous for its unbelievably huge Nile crocodiles that measure up 18 feet long. There are over 8000 of them in the lake so it won’t be hard to spot them. There is also a beautiful National Park filled with many animals. Arba Minch in Amharic means “forty springs,” and the area is rich in many tiny springs that bubble up from the ground. You can see many of them as you hike through Nechisar National Park. The most incredible sight in Arba Minch is the cliff top holy spot of Abuna Yemata Church which is found only after a mildly challenging climb up the sheer cliff wall. Views from the church are remarkable and inside this ancient holy church, you will find beautiful and well-preserved frescoes that adorn two cupolas. With so much excitement, you can rest at Paradise Lodge which is the relaxation you’ll need after seeing such exotic and frightening wildlife.
7. Aksum
Aksum is one of the oldest cities in all of Africa and is rich in legend and mystery. It is believed to be the home of the Queen of Sheba and the final resting place of the legendary Ark of the Covenant. Unfortunately, visitors are not allowed into the church where the Ark is said to be, but you can still check out the ancient Aksumite obelisks found in the Northern Stelae Field. The largest obelisk was recently returned to Ethiopia by the Italian government where it sat for decades after it was taken to It
Sign in or sign up to post comments.
Be the first to comment

10 Best Places to Visit in Ethiopia 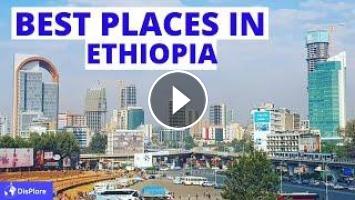 10 Best Places to Visit in Ethiopia Hello Displorers, welcome to another exciting video presented to you by Displore. In this video we shall be taking...